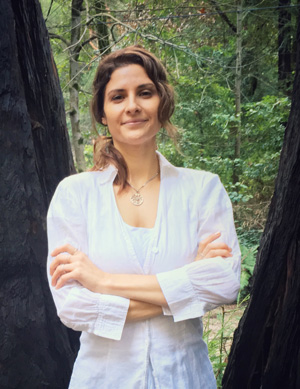 Crista Berryessa has always found a particular interest in how music relates to society, its peoples, their values and beliefs. Her leadership is driven by her desire to have not just a personal experience with music, but to provide memorable experiences for her singers and audience.

Her education began locally at Cabrillo College where she entered the music program as a flute major. She became fascinated with singing through her musicianship classes and wanted to understand more about the human voice and its potential. She quickly became an assistant to Cheryl Anderson and the Cabrillo Youth Chorus where she implemented the music theory program for young singers.

During her studies at San Jose State University she conducted under the tutelage of three powerful female directors, Elena Sharkova, Dr Charlene Archibeque, and Dr Amanda Quist. She was assistant for Ms Sharkova at the Symphony Silicon Valley Chorale and Cantabile Youth Singers. She prepared and assisted the Cantabile Youth Chorus for their participation at Laulupidu in Tallinn, Estonia in 2009. Crista stayed in Tallinn to study for one semester at the Academy of Music and Dance. She learned the structure of Estonian runic song from the late and brilliant Veljo Tormis, studied conducting with Hirvo Surva and Tõnu Kaljuste (founder of the Estonian Philharmonic Chamber Choir) and focused on vocal technique with the choir’s lead Soprano, Kaia Urb.

Crista returned to California to complete her Master of Music degree in Choral Conducting at Cal State Los Angeles under the tutelage of Donald Brinegar. It was there that her education was greatly broadened.

The pedagogy took musical analysis out of traditional theoretical relationships to look closer at the natural patterns of sound and related everything to harmonic structure. Crista returned home to begin a Doctorate of Music Degree at UC Berkeley, but life had another plan. She gave birth to her first son Odin in 2015, and welcomed her second son, Sage in 2016. Rather than chase academia while balancing her family life, she decided to focus her musical endeavors more concisely and locally. She founded the Redwood Chamber Choir in 2016, and  joined as lead Soprano for Voices of Silicon Valley Chorale. VOSV is a small ensemble of young professional singers that focuses on contemporary and commissioned works.

Crista is honored to be the next artistic director of Pacific Voices. The energy of the group feels like a serendipitous match for her and she looks forward greatly to what their alchemy together will bring.  Her conjunction with Pacific Voices at this time is a beautiful reminder that Crista continues to be in service for the great art and science of organized sound. 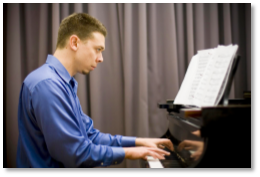 David has been an accompanist, music director, multi-instrumentalist, and music educator in the Santa Cruz County and greater Bay Area since 1999. After receiving his Bachelor's degree in Classical Piano studies from the University of California, Santa Cruz in 2003, David quickly established himself as an in-demand instrumentalist and vocal coach in Santa Cruz County. Focusing primarily on choral accompaniment, David served as both accompanist and music director at St. Joseph's Catholic Church from 2003-2014, accompanist for Pacific Voices Community choir since 2005, and has participated in concerts for the Santa Cruz Chamber Players over the last 3 years.
Other highlights include serving as accompanist and bass singer for the California Central Coast Chorale which has toured internationally and performed at such outstanding venues as St. Peter's Basilica in Vatican City, Carnegie Hall, and St. Stephan's Cathedral in Vienna, Austria.

After earning his Master's Degree in Musicology at the University of California, Santa Cruz in 2019, David has been pursuing a PhD in Cross-Cultural Musicology with an emphasis on historic performing styles of the late romantic era.

Kitchy graduated from Chico State with a degree in Music and an emphasis on Voice, and continued on to get her teaching credential. Teaching is what she loves to do. For 33 years, she has taught choir, guitar, and drama for Santa Cruz City Schools at Mission Hill Junior High and Soquel High School. She is still active at Soquel High as a music class substitute.

Kitchy started singing with Unity Choir (currently Pacific Voices) in the spring of 1999. She is active as a singer, and acted as Assistant Director for several years, and also as interim Director.

Sign up for our newsletter to receive the latest news and event postings.